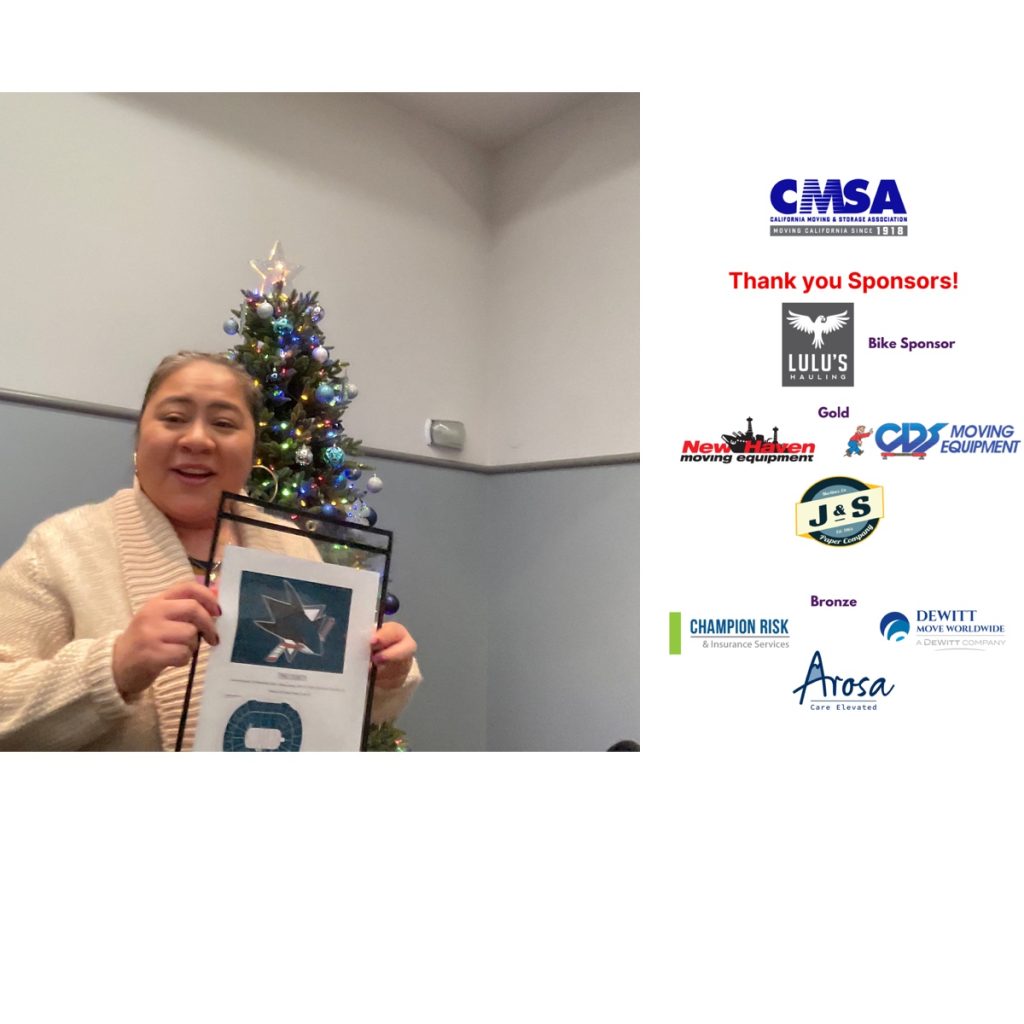 On Friday December 2nd, 2022 the Northern Region Chapter of the California Moving and Storage Association, held its annual holiday dinner at the South San Francisco Conference Center.  Thank you to the staff, including the reservation, bartender and servers for making the event a successful one.

The buffet style dinner was enjoyed by all. As you may know, the chapter is run by volunteer members Griselda Gonzalez and Olga Garcia of CG Moving Co. with offices in South San Francisco and Sacramento, California. We had the president of the association, Steve Weitekamp in attendance, as well as representatives from our major sponsors Pete Geisler and Andy Smith of CDS Moving Equipment, Mark Hildreth of New Haven Moving Equipment.  Not in attendance but always in our enduring supporter list, Dustin Ulmer, Kenny Ulmer, Ricky Green and Ken Jordan of J & S Paper. We also had Casey Myers of Champion Risk and Insurance Services, and Al Olivares Arosa, Integrated Care Management and Caregiving Services. Our San Diego friend and supporter Jeff Nadeau of DeWitt Move Worldwide was not present, but sent his regards and of course supported the event financially.

A huge thanks goes out to our fellow mover and friends Dennis Jenkins and Emily Thurston, with Lulu’s Hauling and Lulu’s Cyclery, who graciously donated two bikes for the big prize raffle. Thank you for your generosity and support! In the four or five years since we have been running the chapter, we have NEVER had to ask them for their support, they give knowing that the raffle ticket sales contribute to the scholarship and charity funds, as well as general fund. Another grand prize was tickets to a San Jose Sharks game, donated by Peter Pfeilsticker of Ace Relocations. Lastly, we want to thank our friends at Macy Movers Chris Meyer and Judy Jones for donating a TV.

Our fellow mover Fred Wallace with One Big Man One Big Truck was also in attendance, and he was invited to “Shake It Up” and helped with the picking the raffle winners. The night quickly became the “Fred Wallace Show”, we thank Fred for his co-hosting duties.
It was so nice to have Debbie Joaquin back in our dinner as a guest of Macy Movers, she had in the past organized the famous crab feed fundraisers and we are trying to recruit her back to be part of the chapter’s leadership. We were so happy to see our dear friend and fellow member Chitra Bheeman with Advantage Moving and Storage, located in Milpitas, California.

The big winners of two bikes were first time attendee Regina Jones, BSN RN of Accurate Screens, a San Francisco Bay Area based company that can help you with background checks, COVID testing, drug and alcohol testing and is a medical and lab supplies distributor. And our friend Dan Dempsey of New Haven Moving Equipment. Our friend Jana Wickham of Advantage Moving and Storage won the TV and Maria Guido of CG Moving Co. won the San Jose Shark tickets.

We are working on our next event, hoping that we will be able to meet in the South Bay, so tell your mover and associate member friends! Date and venue to be announced soon so check our chapter’s website for more information and don’t forget to order your CMSA Women on The Move unisex t-shirts, we have some really festive designs and the proceeds benefit the general fund of the CMSA.

On Friday December 10, 2021, the Northern Region Chapter of the California Moving and Storage Association, held its first in person…

On Friday December 10, 2021, the Northern Region Chapter of the California Moving and Storage Association, held its first in person…